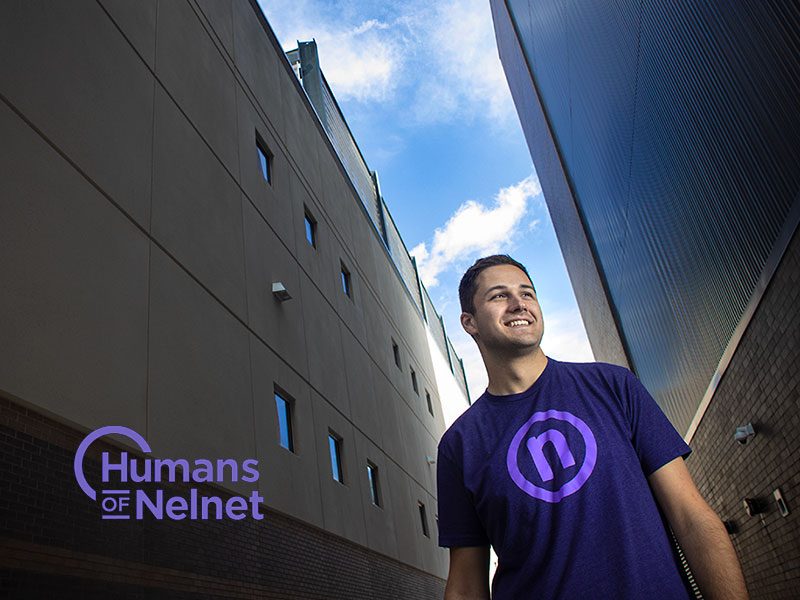 From coding his Myspace profile page to developing software for startups, Nick Graef has built a career out of his passion for problem solving and learning how things work. As a software engineer at Nelnet, Nick spends most of his time designing software and solving problems for both Vosaic and Velocity, which serves as a platform that different products can be built on top of.

Now, Nick takes time to reflect on his journey toward becoming a calculating crafter of code.

“When I was young, my parents would often have to take away the computer because I would spend too much time on it, so I think I was always drawn to computers,” Nick said. “In the early days of Myspace, when that was popular, one of their features was that you could customize your profile with HTML, CSS, and JavaScript, and that was always fun for me. That’s kind of how I started programming – getting into the languages and web design in general.”

After noticing a flyer on a high school teacher’s bulletin board for a computer science program at the University of Nebraska-Lincoln, Nick knew he would be a perfect fit. Nick studied in the Jeffrey S. Raikes School of Computer Science and Management and turned his passion for complex problem solving into an invaluable asset for the future. Working on his senior design project provided the foundation for Nick’s first startup experience right after graduation with two of his classmates.

“We built tournament management and real-time scoring software for golf courses, and we spent three and a half years building a company and trying to sell it,” Nick said. “It was quite the experience right out of college, without really knowing where you’re going or having any professional experience. It was pretty challenging for the three of us.”

Though the team couldn’t build the software into a sustainable company, Nick walked away from the experience with a handful of lessons that continue to help him today.

“Having a superior or unique product doesn’t guarantee success, but having the right team is crucial to success,” Nick said. “Also, burnout is real. It’s important to enjoy your work and have a healthy work-life balance. Finally, this first big startup journey taught me that failure is often the best way to learn.”

After taking a swing at golf software and then taking some time to reflect and explore other passions, Nick teed off the next course of his career at Vosaic about a year after the company was founded. The transition from one startup to another was a great opportunity for Nick to challenge himself and continue to learn. 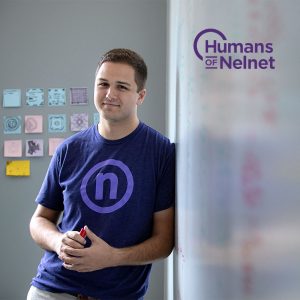 “It’s been a lot of fun because I love how we operate as a startup within a large enterprise. We’ve had a lot of freedom to grow fast even with a really small team – there are only four of us,” Nick said. “My startup background was what really drew me here in the first place. I also think it’s a great product that’s rewarding to work with, because we’re building something to help people.”

While his day-to-day duties vary, most of Nick’s time is spent working on building and designing software for Vosaic and Velocity. Though he loves thinking of coding through a problem-solving lens, Nick also enjoys seeking out the intricacies that different programming languages bring to the table.

“I love learning new languages and figuring out the syntax and semantics of each one. Different languages have really cool aspects to them. When I’m learning a new one, I love comparing it to languages I already know, acknowledging the way that both are designed,” Nick said. “It’s more than just using the language to build something else, you can also appreciate the language as a designed work of art.”

After his two years here, Nick attributes his love for Nelnet to his awesome team and the relaxed culture.

“Obviously you earn vacation time, but I’ve never been discouraged from using it. It’s encouraged that you use it because it’s allotted to you,” Nick said. “I love that part of it, because you want to get your work done, but when you need to take a break everyone understands and supports you.”

Looking to the future, Nick has big goals for where he wants to see Vosaic and Velocity, respectively.

“I think it would be cool if every school district was using Vosaic for professional development. If it was a standard in K-12 and colleges for teacher prep in education, I think it would be amazing if we could get more exposure and sell it to its full potential,” Nick said. “On the Velocity side, our big goal is to redesign the software architecture for the enterprise and provide that as a product for external customers, so that businesses can come to Velocity as a starting point and use that as a model to build their product.”

Outside of work, Nick plays in a softball league, dominates a weekly trivia league, and spends some of his well-earned vacation time each summer volunteering for Launch Leadership, where he helps out on the new staff training committee and lends a technological hand designing new systems to make improvements to their annual summer workshops.

Though he is only in his 20s, Nick has some sage advice for anyone who might be interested in a career in coding or software development.

“Never stop learning and exploring. The industry moves incredibly fast, and companies – even traditionally slower-moving enterprises – are always evaluating how they can leverage new technology to solve business problems. Staying ahead of the curve will make you more marketable.”

If you’re interested in a career in software engineering, coding, or developing, search for what could be your perfect fit. 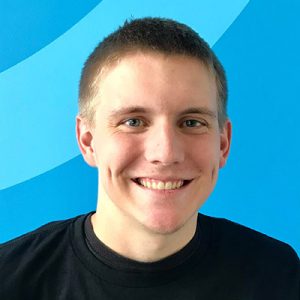