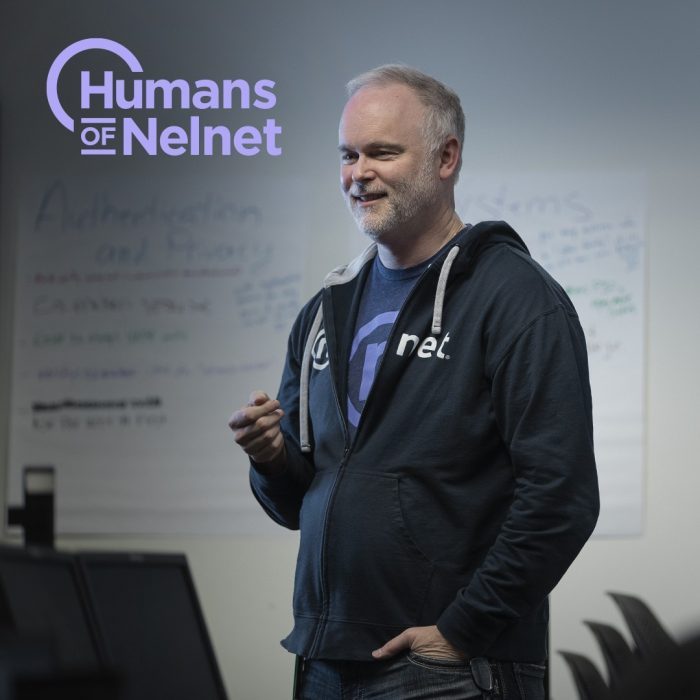 With an office view overlooking downtown Lincoln, it’s easy for Joe Popevis to reflect on his journey to becoming the executive director of Nelnet Diversified Services’ (NDS).

Don’t let the office view fool you. One of Joe’s favorite outfits involves jeans and a navy Nelnet hoodie – if you didn’t know who he was, you’d never guess you were talking to a Nelnet executive. His modest personality deflects all attention from himself onto his team.

“The people who are actually doing the work, and helping customers, and interacting with each other, they’re the ones who get to be proud,” Joe said. “I’m just grateful to sort of ride along with them.”

Born and raised in Sioux City, Iowa, Joe found his way to Lincoln by pursuing a degree in journalism with an emphasis in advertising at the University of Nebraska-Lincoln.

After graduation, he was hired to work in the call center at UNIPAC, a loan servicing company based in Denver that was acquired by Nelnet in 2000. After spending twelve years in the Twin Cities of Minnesota, he found a permanent home in Lincoln. A big factor in that decision was the culture at Nelnet’s headquarters.

“I value good culture because of Jeff [Noordhoek] and Mike [Dunlap]. From the time that I met them, if you had an idea, something you wanted to discuss, or something that was important, you could schedule a meeting with the CEO of Nelnet and he’d actually take the meeting and listen to your idea,” Joe said.

In the fall of 2019, Joe will celebrate 25 years with the company. He knows the journey wasn’t easy and required a lot of hard work. At one point, he worked 100 days straight including Thanksgiving, Christmas, and New Year’s Day.  Today the NDS RFP team is repeating that process by working seven days a week for weeks on end to win the FSA procurement.

His hard work paid off – he’s been serving Nelnet as the executive director of NDS for the last six years. But for Joe, it really is just a title. When someone asks him what he does for a living, he’ll simply respond with “I work for Nelnet.”

“Titles don’t really make any difference to me,” Joe said. “I know some people get really tied into them – the most important thing is whether you’re making a difference. I’ve met people that are, in theory, two levels below the people I’m interacting with and are really driving the conversation and having the biggest impact.”

Joe believes at the heart of every operation is its people. His leadership style incorporates a hands-off mentality, and understands that micromanaging 4,500 employees is essentially impossible. That is why he wants to instill a confidence in his team leaders to lead freely.

“I have awesome people on my teams, and they have awesome teams and they don’t need me to come be in every team meeting, or give them direction or advice on everything,” Joe said. “We let people run their business.”

One of the most rewarding things for Joe is seeing the people he brings into the company grow into their roles over time. To him, being able to help develop his employees is the kind of impact he wants to make before he leaves Nelnet.

“We always talked about if they [a new associate] can figure out how to do certain things, they’d be amazing,” Joe said. “And then you see five years later they figured it out and it’s amazing. That’s really cool.”

When he’s not trying to secure a federal procurement contract, or hosting town hall meetings with associates all around the country, Joe is a typical dad to his two daughters, splitting time between soccer games and theatre performances.

“At this stage in their lives, most of my free time is spent on them,” Joe said.

When he is in the office, his passion still burns bright and he’s excited to keep elevating NDS to new heights.

If there’s any wisdom Joe would like to share with those who want a sustaining career, it’s having the patience and willingness to keep learning.

“Once, when I was meeting with new call center hires, someone raised their hand and asked ‘How long would it take for me to be a director?’” Joe said. “That’s not the right approach. Focus on adding value, focus on broadening your scope – not on what you’ll get out of it, but what you’ll give.”

Joe’s downtown view of Lincoln certainly wasn’t given to him, it was earned through 25 years of hard work, dedication, and constant growth. That’s what made his career rewarding – and why he continues to be motivated every day.