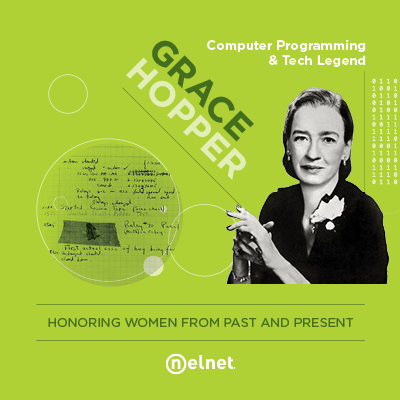 Nelnet Recognizes Notable Women From Past and Present

In celebration of Women’s History Month in March, Nelnet is sharing a series of notable women after whom conference rooms in Nelnet’s new Haymarket (Hudl) space were named. These women are influencers, inventers, and role models, and Nelnet is proud to recognize them in its latest workspace.

You may recognize Estee Lauder’s name from her beauty and cosmetic care brands, but you may not know that her genius marketing mind is the true reason for her success. Her bold decision to make her products only available in upscale department stores allowed her to cement her name as one of the greats.

As one of the most well-known names in the entertainment business, Oprah Winfrey has impacted people across the globe. She was North America’s first African-American multi-billionaire and has made her success count for the lives of others through philanthropy and has been ranked the most influential woman in the world.

Radia Perlman is the human embodiment of the word “trailblazer.” In the 1970s and 80s, she was one of the few female names in the computer programming business and has been dubbed the “Mother of the Internet” for her work in the field.

Admiral Grace Hopper was a computer scientist and U.S. Navy admiral who was a leader to many young technologists. She was responsible for the first compiler for computer programming language and even after her death in 1992 has continued to serve as an icon for female technologists.

Spanx founder Sara Blakely holds another title besides CEO; as of 2012, she’s also the world’s youngest self-made billionaire. Blakely has used her position to influence and help women advance through educational initiatives. Blakely is also the first female billionaire to join the Giving Pledge and donate at least half of her wealth to charity, continuing to make her wealth count for more.