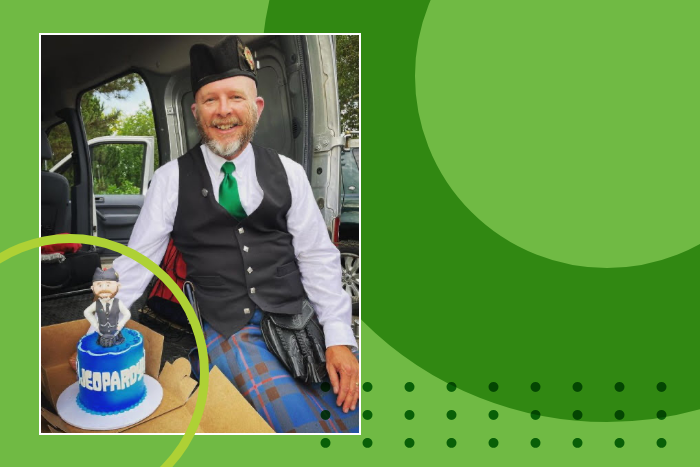 Pursuing opportunities for diversification and growth | By Kyle Danielson | February 25, 2022

The Jeopardy! Experience with Scott Plummer

Nelnet associate Scott Plummer (IT Software Engineer for Team nSlic) appeared on Jeopardy! Tuesday, Feb. 1 and Wednesday, Feb. 2. Scott is a longtime Jeopardy! fan who has been watching the show since he was a kid in the 1960s. This year he applied and got the call to fly out to California to participate on the show. Scott was kind enough to answer some questions about his amazing experience.

Tell us about your history with the show.

I have wanted to be on Jeopardy! for a long time. The first time I tried out was in the late 1980s, when my wife and I were out in California. Back then there was no online test, you had to go to the studio to take a written test and they would manually grade them. If you did well enough they would have you do a sort of try-out Jeopardy! game right there. I wasn’t selected then, but I have been doing their online tests over the last 10 years. When I was actually selected, they had me do a try-out game via zoom because of COVID, so it was a little different from the traditional Jeopardy! game you’ll see, but that’s when it finally worked out for me.

What did you do to prepare?

There’s a really cool website, J! Archive that has an archive of every question and answer from each episode of the show. You can go through every question from a game in a few minutes, so I would study on that site several times a day in preparation. It also helped me find which categories pop up across different games like geography and presidents. I used J! Archive probably more than anything else to get ready for my games.

What did it feel like when you stepped foot on the Jeopardy! set?

I was excited, but not super nervous. I was mainly just trying to remember all the strategies I studied, like how to properly wager on Final Jeopardy! and when to press your buzzer. There were times when I buzzed in and had to guess an answer, but most of the time I tried to buzz in when I had retrieved the answer completely.

What would your dream Jeopardy! category be?

I would do pretty well on a Monty Python category, I’m a huge fan of that group. I find that my knowledge is pretty shallow but broad, and I think that’s how a lot of Jeopardy! contestants are as well. A lot of them probably have deep knowledge in a few areas of expertise, but also a little bit of knowledge in a ton of different subjects.

What advice would you give to aspiring Jeopardy! contestants?

Keep trying, because sometimes it just takes a while for you to get your shot. Sooner or later, you might just have whatever magical recipe that the show is looking for.

Were you surprised to win on your first day?

My first goal was to not be so far in the hole that I didn’t make it to Final Jeopardy!, and then my second goal was to get a few answers right. I was really pleased with how I did given my initial goals.

What was your favorite moment from this experience?

That whole first game was so much fun. The second game was too, but the competition was great and the people were all very nice. The contestants were kind of like me, we were all trivia nuts and Jeopardy! fans who tried out for years, and it was finally our big chance together.

Congratulations on your achievement, Scott! If you want to put your brains to the test, take the online Jeopardy! quiz today.

Pursuing opportunities for diversification and growth