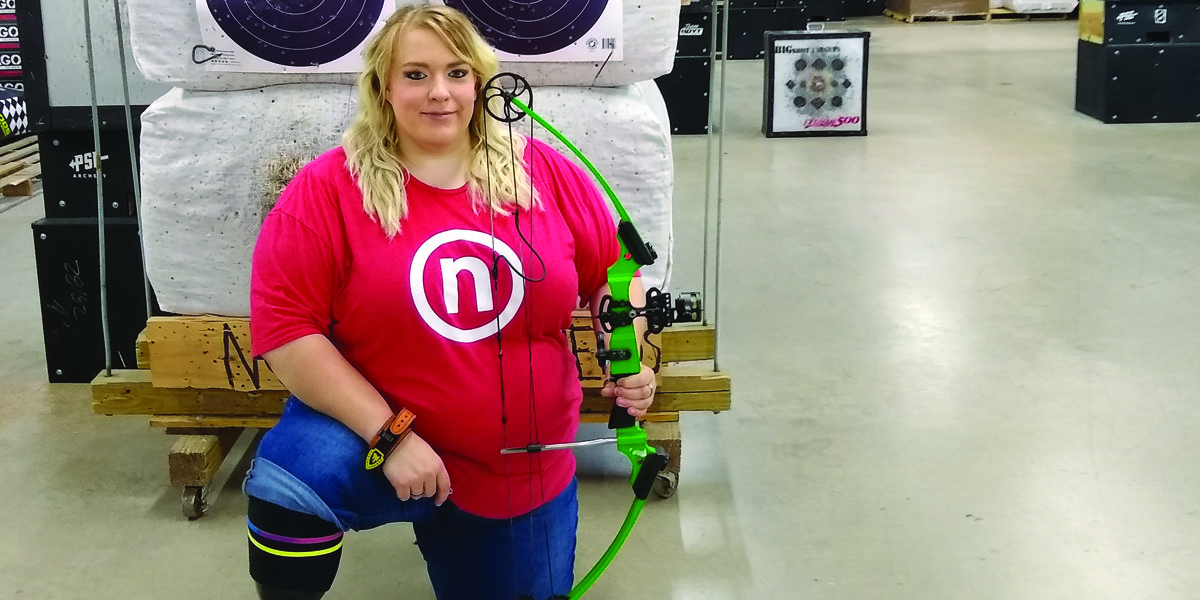 Giving back to the communities in which we live and work | By Jordan Snader | August 21, 2020

For Jenna Jenneman, being active has always been part of her life. She got into weightlifting when she was younger, partly so she could compete with her brothers, and partly because of the relaxing, improve-at-your-own-pace feeling that came with it. The more she exercised, the better she felt about herself. It was a moment away from everything – where she could put on headphones and tune out the world for a while.

Then came the incident that changed everything.

Another recurring hobby for Jenna was fishing. Similar to weightlifting, it was a way to escape from the drama and anxiety of everyday life. She’d even taught herself how to fish – and had gotten pretty good at it. She felt comfortable near the water. At peace.

But one day, the land near the water was especially muddy. And as Jenna walked by the water, she slipped and fell, breaking her leg. It was such a severe compound fracture that her leg was facing almost in the opposite direction.

“I had to go through surgery after surgery after surgery and was constantly laid up,” says Jenna. “I really struggled to be active during that time. And when you’re not active, it’s like you can feel your attitude decreasing, your positivity going down. Your willingness to meet new people or advance your career goes away.”

For five years, Jenna was essentially walking on a broken foot. The operations weren’t successful. Jenna was faced with two major options: continue her life as-is, or amputate.

“I did a lot of research and eventually made the personal decision that I couldn’t continue living the way I was living. I didn’t want to be the person that I had become,” says Jenna. “One thing my doctors and I talked about a lot is, when you get your prosthetic, you have to look at it a different way. You don’t ‘have a prosthetic’. You’re a person – just like everyone else.”

After the amputation, it took Jenna about two years of mental and physical therapy to do basic activities. For the past five years, she’d been walking hunched over with a limp – and it had taken a toll. Originally, the physical therapy wasn’t cutting it for Jenna, she needed something that was going to challenge her.

Then, she was introduced to adaptive sports – and her entire therapy process changed.

“A friend of mine who is an amputee introduced me to wakeboarding. After that, I just continued to do adaptive sports. I realized it’s not the activity that’s hard – it’s about how fun you make it for yourself. I connected with a new physical therapist and she challenged me in different ways. Pushed me to do things that were different. I thought it was really exciting!”

After a while, adaptive sports became a part of her physical therapy. She noticed that many athletes, professional and recreational, in physical therapy will hold off on sports until they’re ready to perform at their maximum level. Instead, she took it slow.

“My favorite adaptive sports are water events. I’ve gone wakeboarding, water skiing, swimming. I also have done a paratriathlon camp with Dare2Tri: Running, walking, swimming. I actually taught myself to roller skate – it was a blast!”

Since her amputation, Jenna has grown to be something of a leader among amputees (especially in the Midwest). Nelnet and Great Lakes supported an event that she created – the Hill Climb Challenge.

“So, the University of Wisconsin-Eau Claire has a really big, steep hill. When I had two legs, it was a struggle. Anyone who’s been on that hill knows it’s a struggle,” says Jenna. “One thing I wanted to do after my amputation was walk that hill. I got this big group of people together and we raised almost $500 for Wiggle Your Toes, a nonprofit that had done a wakeboarding event I’d participated in.”

Jenna went on to create (probably) the largest Facebook group for amputees in the Midwest. The group acts as a place where people with amputations can connect with each other – they ask about product recommendations, talk about struggles they’re going through, and look for opportunities to educate others.

And they take mental health seriously.

“I’ve come across several situations where I’ve had to stand by someone’s side and say ‘your life is not over because of your amputation. It’s just a new beginning.’”

One of Jenna’s goals is to educate people about amputees. It’s been a firsthand learning experience for her as well, but it helps that she understands both lives.

“One of the biggest struggles as an amputee is a person’s financial situation. Most basic prosthetic legs before insurance can cost up to $50,000.00. If you want a specialized leg or foot such as a running blade or a snow skiing foot, the cost can be even more,” says Jenna. “Keep in mind, most of these parts can last less than a year. Therefore, eventually they need to be replaced- just like a vehicle. I want people to understand that these do not come cheap and these are a part of our body. I consider my prosthetic leg as I would treat my regular leg except with a little more care.”

“I know what it’s like to have all four limbs. I first met an amputee a long time ago – I’d gone to shake someone’s hand and they had a prosthetic arm,” Jenna says. “I didn’t know how to react. I just felt embarrassed.”

The best thing, Jenna says, is to treat amputees like the people they are. Offer help when someone is struggling (even if they don’t have a disability). Treat people like people – and you’ll be just fine.

“I have people all the time tell me that they don’t see me as an amputee. They see me as Jenna. There are so many amputees that can’t do adaptive sports or can’t be as active as I am. They sometimes go into a depression after amputation and, in turn, define themselves as an amputee.

Here’s how I look at it:

If you go into the mirror every day and say ‘I don’t look good today’ over and over and over, you’re going to feel that way. Every. Day.

If you go into the mirror every day and say ‘I can’t do this because I’m an amputee, you’re going to feel that way. Every. Day.

It’s not bad to identify as an amputee. But I think it’s important to remember that you’re also a person. A person with goals, feelings, achievements. It doesn’t matter what obstacles get in your way. You just have to constantly move forward so people can see us for who we are.”